Therapy is the key component of addiction treatment, and for good reason. Through both individual and group therapy, rehab patients slowly reprogram the brain. That way the brain doesn’t need harmful substances anymore. Through addiction therapy, patients also figure out what it was that lead them down the path of addiction in the first place. There are many benefits of group therapy.

The mental aspect of therapy is crucial to its success. Still, it’s just one of many benefits of group therapy activities. In this blog, we’ll discuss what group therapy is as well as how it can be a great tool during the treatment and recovery process.

What Is Group Therapy? 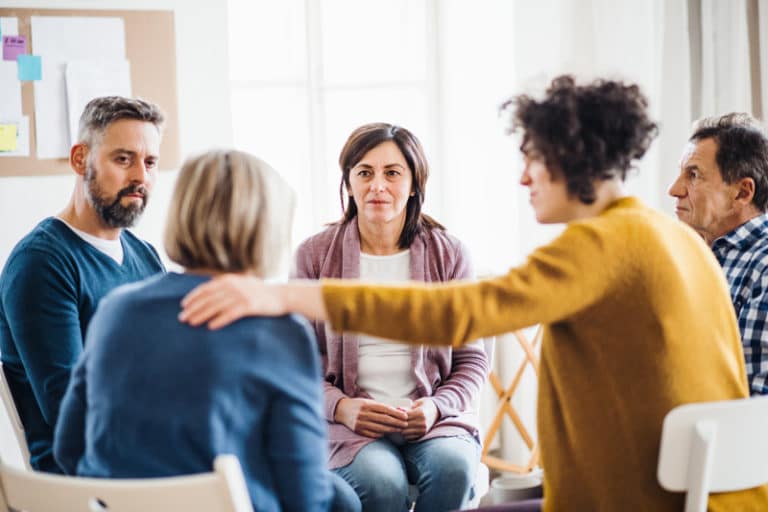 The history of group therapy as it pertains to addiction treatment and recovery dates all the way back to the early to mid-20th century. At the conclusion of World War II, many soldiers that were returning home were in need of treatment.

Many of these soldiers were in need of treatment simultaneously. Therefore, treatment professionals began to experiment with group therapy sessions.

Also, more and more treatment professionals began incorporating group therapy into their treatment methods. Afterward, group therapy continued to gain traction to the point where it is the way it is today.

In fact, one particular study showed that women who suffered from metastatic breast cancer and attended group therapy lived up to 18 months longer than those women who did not attend group therapy.

Are There Different Types of Group Therapy?

Support groups are the most common type of group therapy model. They’re also the ones that are most commonly portrayed in TV and movies. These types of groups also focus on providing day-to-day life support to those who attend.

Support groups are also a great way to make friends and be around like-minded people who are all there with the common goal of remaining clean and sober. Support groups can be faith-based but they don’t have to be. Common examples of support groups include AA, NA, and Alanon.

Cognitive-behavioral groups exist so that those in attendance can alter their overall behavior. That way people no longer feel the need for drugs and alcohol.

During cognitive-behavioral therapy, the goal is to alter a person’s behavior by modifying or changing beliefs, perceptions, and even their entire way of thinking. Essentially, people are reprograming their brains so that they don’t want or need illicit substances anymore.

During psychoeducational group therapy, you’ll learn more about the medical, behavioral, and psychological effects that are associated with substance abuse. The main focus during these types of therapy sessions is to teach those in attendance to avoid situations that they might associate with using and abusing drugs and alcohol.

It also helps them identify certain triggers that they may have. That way they can do their best to either avoid them or not let those triggers overpower them.

Skills-development group therapy utilizes the cognitive-behavioral model in helping to deal with triggers and urges. This type of group therapy also focuses on any anger management issues that someone may have. It also may focus on any other issues that might have played a direct role in a person’s previous substance abuse.

Interpersonal process therapy focuses on human sociability as it relates to thighs such as attachment. It addresses how being around certain people or in certain social settings might have led you down the path to addiction. It also shows you how to avoid finding yourself in similar social situations in the future.

What Can I Expect During Group Therapy Activities and Meetings?

Meeting typically begins with an introduction period where new members can introduce themselves to the group and everyone can go around and share who they are. From there, the meeting will begin where people can share what might be going on in their lives.

People may also share how they were in a situation where they thought about using again. Once again, the topics discussed in these meetings vary depending on the type of meeting it is and its location.

One of, if not the most important aspect of group therapy is communication. Many issues associated with addiction and substance abuse can be solved simply by just talking about it.

Communicating in a group setting not only benefits the one doing the talking, but it also benefits those who are listening.

Since everyone there is either currently suffering or has previously suffered from addiction. Chances are the person speaking is dealing with similar circumstances, problems, and consequences as the people who are listening.

Before you can truly recover from addiction, you have to accept accountability for your actions. Once you become accountable, it becomes much easier to achieve goals and make positive life changes.

By regularly attending group meetings and developing bonds with those in said meetings, they can help you stay accountable for your actions. They can even help you maintain your sobriety.

Addiction can be lonely and isolating. Your “friends” don’t want to be around you anymore now that you are sober. You might also be experiencing hardships with family members or other loved ones that you might have hurt or alienated while you were using.

Oftentimes the feelings of loneliness and isolation can cause a person to relapse because they just want to feel better. When regularly attending group meetings, you build relationships with those who are also in your meetings. You are able to bond with them over the common goal of sobriety. Most importantly, you develop new, healthy friendships and relationships with people who want to see you succeed.

Witnessing the Recovery of Others

Getting and staying sober is no easy task. Especially for those who have suffered from relapse and think that it’s just not something that they can do.

Attending group meetings can serve as an inspiration and proof that it can be done. Sitting in a group meeting and hearing from those who went through something similar if not the exact same as you and seeing that they got their life together and on track can be just the motivation you need to give it one more try.

Reap the Benefits of Group Therapy At Grace Land Recovery

Group therapy is not only a great way to work on achieving your sobriety, it allows you the chance to build a support system consisting of other people who are also looking to get and remain sober. At Grace Land Recovery, we understand the benefits of group therapy and group therapy activities. This is why group therapy is such a big part of our treatment program.

If you or someone you know is suffering from addiction, contact us today to learn about the various treatment programs that we offer, including group therapy. We want everyone that walks through our doors to leave and go on to live a happy, healthy, and sober life.